Between 2010 and 2013, OCSPLORA produced and published no less than four magazine issues (which, naturally, were called volumes). The magazine was called OCSPLORA: The Creative Revolutionary's Handbook.

Below, find images and notes from each volume.

Volume 04 of OCSPLORA, published in June, 2013, was an exploration of the idea and world of fashion and style.

The theme of this volume was the brainchild of my friend and fellow OCSPLORA contributor, Stacey. She pitched two interviewees, one an up-and-coming fashion blogger in her home city of Edmonton, Alberta, and the other a friend and graphic designer who had worked with a socially-conscious clothing company to design a line of cool tee shirts.

Stacey pursued both those interviews while I became slightly obsessed with an orthodox Jewish reggae rapper named Matisyahu. I had heard of him a while back, but never really got into his music. Somehow I found out he had recently shaved off his beard (a defining characteristic I remembered) and released a new album, so I checked it out and really liked it. I dug deeper into the beard thing and decided it could sorta fit into the fashion theme of the volume.

The two interviews came in really well. Janis had some great tips for following your dreams, growing a blog, and embracing your hometown. Joe talked about how to hold your favorite clothing brands to a higher standard. And the company he had worked with, Moselle, had a really cool and interesting story as well.

Earlier that summer, Stacey had come to Boston to hang out with us and go to a big summer music festival featuring one of her favorite bands. We took her to Walden Pond where she learned about Henry David Thoreau for what she claimed was the first time in her life. When she got home she started reading Walden and told me there was some stuff about fashion in there we should write about, so I did. And that became the fourth story for Volume 04.

Janis Galloway | Blogger-Stylist-Fashionista Extraordinaire Meet a fashion blogger from Edmonton, Alberta who loves her city and has become central to its hip fashion scene.

The Controversial Beard of Hiphop-Reggae-Pop-Performer Matisyahu Matisyahu was a Hasidic reggae star until he shaved it all off. What’s left when the beard is gone?

Thoreau on Fashion: Thoughts on Fashion from The Legendary Naturalist, Provocateur, and Champion of Simplicity In 1845, Henry David Thoreau moved to the woods to figure out life. And fashion?

OCSPLORA Volume 03 was published in March, 2013. It is about a folk-singer starting a record label, about the journey coffee takes from bean to beverage, about four friends backpacking the Appalachian Trail, and about the most unnatural sandwich that has ever been invented... in prison. 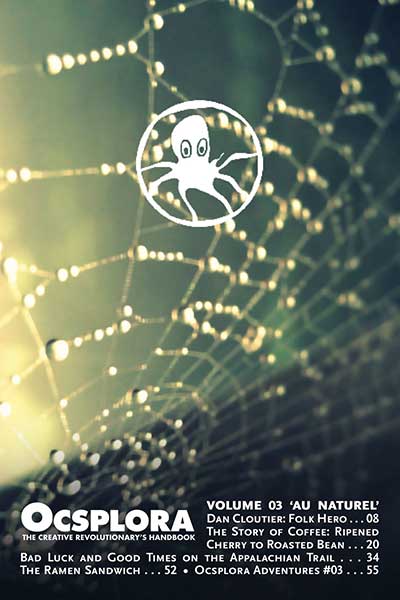 Dan Cloutier: Folk Hero “When you’re a solo independent artist, the first thing most people say is, well you need a record label to do anything. So [we] decided to make our own record label.”

The Story of Coffee: Ripened Cherry to Roasted Bean "The oppression continues today as the price for coffee on the commodities markets swings wildly, a price most often controlled by what the large coffee purchasing giants are willing to pay."

Bad Luck and Good Times on the Appalachian Trail "We stood shoulder to shoulder in front of a giant rock, looking clean and shiny, grinning from ear to ear. ‘You guys are just starting today, aren’t you,’ he sort of asked, sort of stated."

The Ramen Sandwich "When money is tight, which it often has been for me, I reach for ideas. I reach for resourceful ideas to eat and have fun. I learned this sandwich from my old boss. He learned it in jail."

02 | A Picture Is Worth A Thousand Words

Volume 02 was all about photography, and seems to have been published in October, 2012, judging by file dates on my computer. It was probably the one I worked on the most, and the most intensely. It was certainly the one I ordered the most copies of. I still have probably 100 sitting on my bookshelf, most of them still plastic wrapped in bundles just like the day I picked them up from the printer. 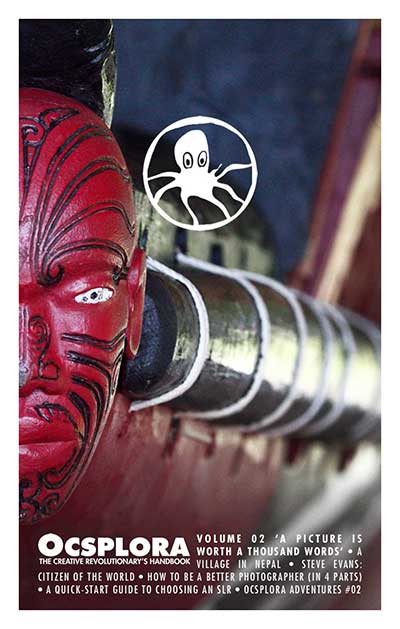 Steve Evans: Citizen Of The World Steve Evans is a cultural researcher, communications specialist, and world-class photographer. He has posted over 2,500 photos to Flickr.com, which he makes available for anyone to use for free. Find out what makes him tick and why he does what he does.

• A Village in Nepal by Sara Dekker, a beautiful photo journal of a place not many people get to see.

• Discover The Photographer Within: 4 Steps To Better Pictures by Steve Evans

OCSPLORA Volume 01 was published in September, 2010, and covered four different themes. Cover photo was courtesy of my friend, Valerie Thomas. 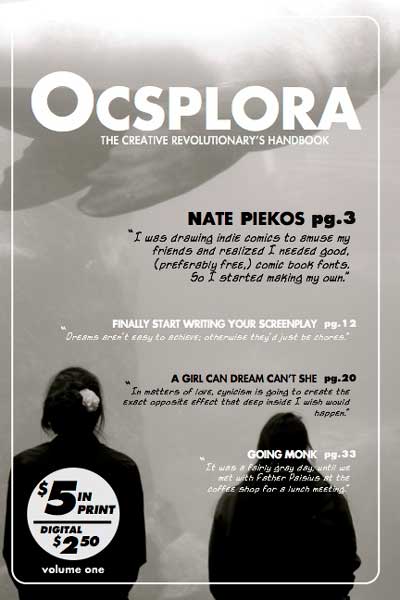 SEX & ROMANCE
A Girl Can Dream Can't She? by Jenn Renee Pekol
A Shade Of Red by Matt Wood
Limerence: The Intense Feelings We Have For Other People Before They Even Know Us Or Reciprocate by Patrick Dodson

BEGINNINGS
Going Monk by Toby Stevens
How To Find Home by Nate Green
If They Hadn't Been Pushed, They Never Would Have Made The Leap by Chris Guillebeau